1)    Who is the CEO/Chairman of the Board of MLS LLC?  Bloomberg lists it is as Richard A. Peddie, the former CEO of MLSE (Maple Leaf Sports Entertainment). http://www.bloomberg.com/research/stocks/private/snapshot.asp?privcapId=4312581 I’ve asked Mr. Peddie on twitter but he simply blocked me without saying no. He was asked by several people over a couple of days and he continued to ignore the question. Then, @sisusoccer (an anonymous account, to me) asked and Mr. Peddie did go on record with a quick “no”: https://twitter.com/SisuSoccer/status/575467792796807168 But Mr. Peddie would not respond to any follow up questions about when he left the position or who is the current CEO.  Also, former USSF president and lifetime director of the USSF Foundation, Alan Rothenberg is named per this site http://www.corporationwiki.com/New-York/New-York/alan-rothenberg/136277457.aspx as chairman of MLS LLC. Is Mr. Rothenberg Chairman of the Board/CEO or has he ever been? None of Mr. Rothenberg’s or Mr. Peddie’s online profiles disclose any employment for MLS LLC or related companies (other than USSF and MLSE, of course).

2)    Who are the majority owners of MLS LLC? I believe it to be The Anschutz Corp, The Kraft Group, and Hunt Sports LLC and maybe a few others: we know the teams are essentially franchises and MLS contracts with all players, parties, and has authority to make all major decisions. The exact structure is discussed fairly well in the first half of the decision from Fraser vs MLS (see end). Though from 2002, I can find no evidence the fake-competition model has changed nor the original majority owners.

3)    If the structure outlined in Fraser is accurate, it would mean the new entrants are transferring ownership of their teams (private corps in NASL) to MLS LLC for a right to be in the corporate umbrella. And they are doing this while also paying entrance fees? Since entry fees are relatively high, what promises of future returns are being made to these new entrants? Since the larger TV deals are mostly locked in for some time and since the attendance figures appear over-inflated in cases (easily proved by photo), are they indeed relying on “suckering” new entrants, similar to a ponzi scheme and as discussed by the soccernomics team?

4)    What is MLS Partners LLC (active)? http://www.corporationwiki.com/p/2espfd/mls-partners-llc  Originally created in Delaware on 2/19/2014 but also recorded in California. I can find no news or explanation about this corporation which appears to be owned, at least in part, by MLS LLC. I have called and emailed people within MLS to ask but they’ve given me no response. I wondered whether it was disclosed to the union during the CBA negotiation so I called and emailed several people within the union, including Bob Foose and John Newman, but received no response. Not even “it’s a non-factor”. Why let me stir a pot at all and why not tell me to buzz off?

5)   What is MLS Consulting (inactive)? http://www.corporationwiki.com/New-York/New-York/mls-consulting-inc/73911463.aspx which was owned and/or operated by Alan Rothenberg and Douglas Quinn, former president of SUM and former President of DallasFC  There was a third related corporation, also inactive, called “De Operating a Professional Soccer Team.” (I’m not kidding) However, for some reason, I cannot find any of the links I had been previously viewing. What are these sister/shell corps owned and/or operated by MLS or USSF officers or them together? How many are there?

6)    What is the exact nature of the lawsuit filed only last December by USSF against the USMNT player’s association? http://dockets.justia.com/docket/illinois/ilndce/1:2014cv09899/304155 It appears there was an arbitrated dispute regarding national team player images that was decided in favor of the USMNT and USSF has sued to undo the arbiter’s decision. This legal dispute has rendered the USMNTPA broke per the reports filed with the Department of Labor http://kcerds.dol-esa.gov/query/getOrgQry.do .

7)    Where is the 2010 CBA? If it is never disclosed and no one has a copy of it, how are contracts being negotiated? The player agents or any lawyer for a player must certainly have a copy they could disclose. Otherwise, how can terms be decided in a uniform manner?

8)   How much money, exactly, has MLS LLC and its wholly-owned subsidiaries received in public funds? Unlike other sports leagues comprised of multiple individual corporations, MLS LLC is one giant corporation potentially worth about or more than $3B (estimated guess from team values per Forbes). Yet it has received $1.5B in public assistance for its stadiums. https://twitter.com/neildemause/status/580709905390284801 Was almost half the corporation’s value derived via welfare? And this welfare-fattenned beast is actually one of the largest sports corporations around. Americans have surprisingly little control over something for which they’ve paid half.

9)   What are the real attendance figures or a legitimate estimate? I recently saw a photo of a Houston-Dallas game at BBVA Compass Stadium. https://twitter.com/EmptySeatsPics/status/594328707516506112  The stadium was clearly less than half full – indisputable. I estimate 40% full. The announced attendance was 19,975 (20K) but the stadium capacity is 22K. Total bullshit. The attendance figures are undoubtedly used to persuade entrants and sponsors. Is this more evidence of ponzi-scheme-like behavior or just number fudging?

10) As a former USSF president (Rothenberg), lifetime director of the USSF Foundation and CONCACAF VP (and if he is/was the CEO of MLS LLC), is this not a conflict of interest prevented by USSF or FIFA rules? With Garber as well, who is a current board member of USSF. Is Mr. Garber permitted to vote on all matters pertaining to division one? Including which corporations/entities should be allowed access?

11) USSF is sanctioned by FIFA. Regardless of the directorships, what are the FIFA rules regarding favorable FA treatment of individual teams/corporations? Are MLS and USSF allowed to collude so openly with no administrative recourse to other entities? IMO, the need for the NY Cosmos or top NASL teams to be allowed a shot at D1 competition is incontestable.

My odyssey with MLS started just a few months ago so I am trying to catch up to everyone on a lot of things. I give great thanks to all the free-market/open system advocates out there for all the guidance, data, info, history and news they provide. They actually care about the future of American soccer. Thank you.

In my opinion as well, an objective analysis shows this company is harmful to American soccer. It’s a centrally controlled, anti free investment, anti management freedom, dictatorial communist system which only ensures the development of American soccer will always lag behind the superior systems of the world. I suspect it is designed in this manner not to sustain growth but to ensure that any value or wealth generated by the sport of soccer within North America is captured by a select few individuals. And to achieve this monopoly on the future of soccer, it does so with disregard of the negative effects such a closed, imprisoned system has on the potential development of the players or overall sport within America.

Though I have been amassing data and info, MLS Media members are for the most part ignoring me completely. I think they view me as an irrelevant nuisance. Admittedly, those I did speak to were incredibly polite (ty!) but none would answer any questions. I will add more to this list as I go along and continue seeking answers.

If you are able to assist with any of these, a lot of people would be greatly appreciative. Also, I personally think it would make a good story for any intrepid sports journalists out there tired of reporting scores and injuries.

EDIT: I have been advised that the photos cited in No. 9 were taken early and that the game did fill up further. If anyone has good photos of game crowds at their height, please share them with @TheMehdiMan. I am also familiar that “tickets sold” often exceed attendance. However, for this to be plausible in an example like the HOU/DAL game, there would have to be approximately 9000 empty seats which were purchased. These numbers seem inflated and deserve questioning. Also, unlike other leagues and teams whom most likely also inflate attendance figures, MLS uses these numbers to lure new entrants into the league, who are paying large entry fees and, ostensibly, assigning ownership of their teams to MLS LLC.

MLS’ franchise, faux-competition structure, as discussed by the Court in Fraser vs. Major League Soccer: 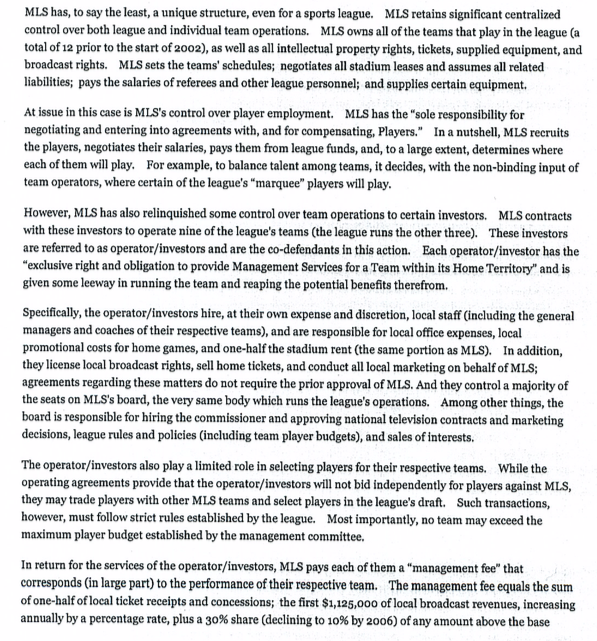 Soccer United Marketing…I have not yet even started with you.

One thought on “List of Questions Regarding MLS and USSF”