I do not know if I believe in God but I whole-heartedly believe in the statement above.  Weird, huh?  We southerners often make no sense.

I used to love football more than you could imagine. I still love it but the consistent nuisances and self-righteousness from the NFL has ebbed my love over the past decade.  I loathe Roger Goodoofus for smugly and stupidly altering the game at every media indignation and soundbite.

Apparently, this is what you get for 44 million a year.

Stay away from my conference, Goodell!

Fortunately, while the NFL is run by a bunch of twits, the SEC is not.  Do not get me wrong, there are plenty of idiots in college football and even in the SEC….ahem, ahem referees.  But those at the top of the SEC are the best.

Kudos to you, Michael Slive.  Every sports league, conference, and even government agency at all levels are seemingly run by the kind of people we want to throw shoes at.  But not the SEC.  Ever since they added the championship game in 92, the SEC has been on a destined path.  The other conferences cannot keep up.  Slive has done well.

As a fan of an SEC school, I could not care less about the future of other conferences.  I just want SEC to thrive and I want to win it every year.  Screw you Bama and Georgia and LSU!  And if we win, sure, why not… we will play whoever else in the nation y’all can muster.

You could take all the worthy teams from every conference and it would not stand up against the SEC in most years.  And given the massive competitive edge in television revenues and recruiting, this disparity will only grow.  High school kids know to go to the SEC if they want NFL scouts to see them play regularly.

And not only does the SEC do football better than rest, it does expansion better.  Texas A&M was a fantastic addition.  Slam dunk on that one, Slive.  While Mizzou is kind of weird fit, we will adjust to the new dynamic and eventually it will feel like an old pair of shoes.  Kind of like South Carolina at first.  New states and new frontiers.  Now, let’s collect some checks and play football.

Or at least until the next expansion to 16 teams or 18 or 20 or wherever.  Looking at the map and financial realities, I am going on record with my prediction.  Eventually, there will be three major conferences of 24 teams each:  The SEC in the south east, Big 10 in the North East and the PAC-24 with every one to the west.  And another weakened fossil of the ACC/Big12/Whomever that will encompass all the scrubs.

In accordance with their tried and true method of seeking out new territories, the SEC will first pillage the ACC for North Carolina and Virginia.  I do not care about ACC buyout clauses.  They will not permanently stop any team from shifting from one conference to another.  And while wounded, the ACC would continue for at least a while.

Not related but why not include this photo.

At this point, the SEC will have thus prevented any further Big 10 expansion into the South.  The Big 10 will have to seek out western, northern ACC and smaller conference schools to expand further.  I also do not think the SEC targets Maryland at any point because it would be an awful fit…even worse than Maryland’s uniforms.  They deserve the Big 10.

The SEC may pause for a bit and settle out in a 16 team conference with newly negotiated TV contracts.  It’s never bad to renegotiate the contract after a round of expansion. $$$

But eventually, the SEC will again look west and hope that after however many years, Texas has learned its lesson and seen enough of the dollars and top athletes rolling into College Station.  Slive knows Texas will play hard ball a long time but not forever.  The Big 12 is a doomed conference. 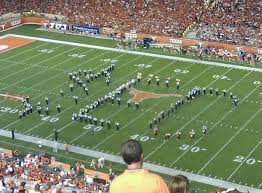 The A&M band gets it.

Slive knows Texas will have a choice: go it alone as an independent or join a revenue sharing conference.  Since independence worked for Notre Dame in the short run but proved disastrous to their program in the long run, Texas is likely to have second thoughts about being an independent.  Especially if Texas A&M manages to win a title before this decision is made.  Heck, an A&M title may even be what starts the ball rolling on this round of expansion.

The SEC will hope to add Texas.  And then Oklahoma but only if Texas is coming.  But they would not stop at 18 though. 18 is a difficult number for a conference.  You cannot split into four balanced divisions.  If you split into two divisions of 9, you would have to eliminate many longstanding and popular cross-division rivalries like Alabama-Tennessee, UF-LSU, and Georgia-Auburn.  I think they would immediately seek to move from 18 to 24 IF Texas (and therefore Oklahoma) join the SEC.   At 24, there would be four divisions of six, allowing plenty of spots for rotational and annual cross-division games.

Further, the effective disintegration of the B12 would leave the remaining universities scrambling to seek out new pastures and may create a similar scramble in the ACC.  This would be chaotic and unpredictable early on.  To ensure further targets do not get entrenched into other power conferences, the SEC will immediately look to solidify itself as the premier college sports conference for the foreseeable future, potentially ending further expansion for a long time.  But where to next?

Oklahoma State and Baylor are likely to join as well but not because the SEC wants them.  The SEC will look at them as the cost of adding Texas and Oklahoma.  Oklahoma State, Baylor, and even the states’ legislatures have done everything they can to keep the schools tied together.  So to add Texas and OU, the SEC will also take their little brothers.  Meh…but we are now at 20 teams.

At this juncture, the SEC will look to finally end the charade of the ACC being a power conference and dominate the south without any real competition.  It will also need to do this before the ACC goes picking in the heaps of the old Big 12 in an attempt to assure its longevity.

ACC schools have not been SEC targets in the past because they do not provide any significant new revenue streams or TV markets.  But having reached it’s norther frontier and unlikely to go as far west as New Mexico, the SEC will take the best of the rest from the lands they already own.  It will finally take in FSU, Georgia Tech, and Clemson, bringing us to 23 teams.  They are good cultural fits and despite the objection of UF, UGA, and USC, they will likely be unable to muster enough votes by banding together and lobbying to stop such a move.  Gator & Dawgs & Cocks won’t be enough? Oh my!

At 23 teams, the SEC will have plenty of suitors calling.  West Virginia will literally beg the SEC and probably offer fracking rights as a sweetener, if not outright ownership of a county or two.  I bet Slive could get the Governor to get down to his knees and pledge allegiance as if he were Emperor Palpatine.  Louisville and Texas Tech and Miami will likewise be hoping for that final spot.  But they will be left out.  The state of West Virginia does not offer enough incentive to add WVU and the State of Kentucky is not financially worth having a second school.   Miami and Texas Tech will be left wanting because the SEC will already dominate the states of Florida (UF, FSU) and Texas (A&M, Baylor, UT).

Miami is the least likely of the four to get in.  While Texas Tech, Louisville, and West Virginia may have a small chance, Miami is not a college town and the university does not have a stadium.  They play 25 miles away from campus in front of crowds of 10,000. 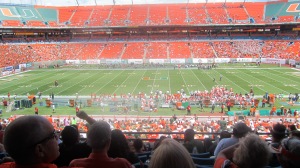 Not exactly an SEC atmosphere

Northwestern High School in Miami draws in more fans on Friday nights.  And there are seemingly more Gator fans in Miami than Hurricanes.  So no to UM just as TT, UL, and WVU.

Rather and brilliantly, the SEC will take Duke.  A football minnow but one of the most prestigious schools in the south.  And a basketball powerhouse.  Having already brought in several ACC schools, Duke will fit naturally into the new 24 team super conference.  At this point, even the snobbiest of Duke eggheads could not argue that SEC academics would not be sufficient as the conference would have added UNC, UVA, GT, and UT to go along with AAU schools UF, Vandy, Mizzou, and A&M.  I cannot be certain but I have been told by people I trust that dukies are supposedly smart.

Their students certainly understand the value of money.

Considering the reality of the landscape should the SEC be sitting at 23 teams as mentioned above, those supposedly smart dukies would happily join.  It would be too much research money to pass up. Heck, maybe they’d even be able to lower tuition.  Apparently, it’s a little too high.

Nevertheless, just like that the SEC will be the undisputed king of the two largest revenue college sports in America.  The corpses of the ACC and Big 12 would continue to be pillaged by the Big 10 and PAC-whatever as they seek to catch up.  But no matter who they add, the reality coupled with America’s continued demographic shift to the South means they would not be able to challenge the SEC as the premier conference for a generation.

Get it done, Slive!  The SEC is already the king.  Make it an emperor.

One thought on “God Bless the S.E.C.”